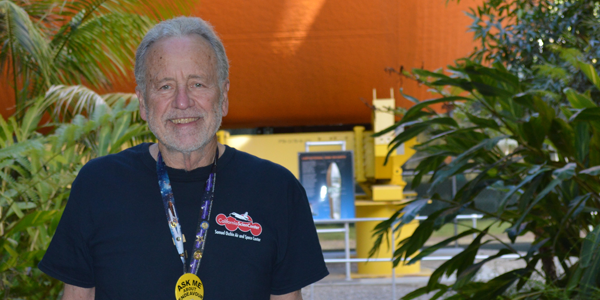 Chuck Milam has been volunteering at the California Science Center for over a decade, since 2009. He started in the Human Resources department, later moving to the Education department where he was stationed in the Ecosystems gallery and served in various other departments until landing under space shuttle Endeavour as a Guest Services volunteer. He believes that the strong volunteer corps at the Science Center is an integral part of helping the younger, high school-aged volunteers develop effective communication skills. He loves the camaraderie of the volunteers and staff and thinks our CEO Jeff Rudolph has it exactly right when it comes to valuing the contributions of volunteers.

Recently, Chuck and his wife Marilyn decided to review their estate plans and he thought it was the perfect time to make a planned gift to the California Science Center Foundation. He transferred some retirement funds into an IRA that he created as a vehicle for making planned gifts to his top philanthropic priorities.

After many years of working in public and private sector positions, Chuck says he is enjoying his retirement so much and has achieved an immense level of satisfaction from his involvement as a volunteer in the various nonprofits he supports. He is a strong believer in life-long learning and says his legacy at the California Science Center, through his gifts and volunteering, is to make it possible for others to continue to learn and enjoy their visits to the Science Center.